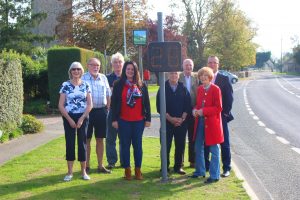 Community volunteers in two West Suffolk villages will be attempting to slow speeding traffic â with the backing of local councillors.

Residents living close to the A1101 in Flempton and Hengrave say they have been concerned by a number of near misses which they attribute to speeding vehicles.

The sign has been paid for through funds from the parish council, locality grant funding from St Edmundsbury Borough Council ward member Cllr Susan Glossop and Suffolk County councillor for the area Cllr Beccy Hopfensperger.

Cllr David Bambury, chair of the parish council said: âWe are very grateful for the funding support from our community as well as both our Borough and our County councillor. Lots of residents have raised concerns about speeding traffic through both villages, and the evidence from elsewhere is that these signs can have a positive effect in persuading drivers to slow down.

âCommunity volunteers will be helping to run the scheme â repositioning the sign at various points along the road and monitoring their effectiveness. It is hoped that the whole community will benefit from the traffic being slowed down.â

Cllr Susan Glossop said: âAs a resident of Flempton, I have witnessed first-hand the issue of speeding in the village, while other people in both villages have also raised their concerns with me. So I am delighted to be able to support this community led initiative. The success of this sign in slowing traffic will be monitored. Residents love where they live in Flempton and Hengrave and this sign should make the community a safer places to live.â

Cllr Beccy Hopfensperger said: âThe community has asked us to look at these vehicle activation signs as an effective solution to the issue of speeding. Residents are concerned that cars, lorries and other traffic are ignoring the existing 30mph signs. This solution is designed to shame drivers by flashing how fast they are driving and has been shown to work elsewhere. This puts the power in the communityâs hands to trial this sign at different positions and monitor its effectiveness, and so I am pleased to be able to support this initiative.â