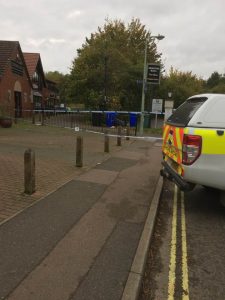 Police investigating a stabbing in Bury St Edmunds have arrested a second person in connection with the attack.

Officers were called shortly after 11.35pm on Friday 25 October, following reports that a man had been stabbed during an altercation with a group of four or five males in the car park outside The Moreton Hall pub in Lawson Place.

The victim â who is aged in his 20s – was taken by ambulance to hospital after sustaining life-threatening injuries. He remains in hospital and his condition is now described as stable.

Last night, Saturday 26 October, a 24-year-old man from Bury St Edmunds was arrested on suspicion of conspiracy to murder. He was taken to Bury St Edmunds Police Investigation Centre (PIC) for questioning and has subsequently been released on bail until Monday 18 November pending further enquires.

This followed the arrest of a 29-year-old man, also from Bury St Edmunds, which took place in the early hours of yesterday morning. He was taken to Bury St Edmunds PIC for questioning and has since been released under investigation in connection with this incident.

Detectives continue to believe that this was not a random attack and are treating it as a targeted incident at this time. A cordon put in place at the scene of the crime was lifted yesterday afternoon.

Anyone who witnessed any suspicious activity or has knowledge of the incident should contact Suffolk Police, quoting crime reference 64977/19.