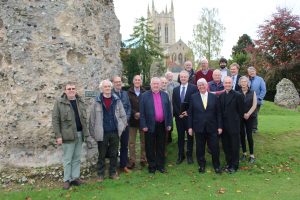 The first project to come out of the Abbey of St Edmund Heritage Partnership will see the creation of new public tennis courts.

St Edmundsbury Borough Council, one of the organisations involved in the heritage partnership, has been granted Scheduled Monument Consent by Historic England to move the courts.

The remnants of the former Eastgate plant nursery will be demolished and two new tennis courts will be constructed. It is hoped that work on the new tennis courts can begin soon after the completion of two consultancy studies of the Abbey of St Edmund in the autumn. Both studies are being funded by Historic England and the Borough Council. It is anticipated that the new courts will be open for public use by the summer of 2019.

Cllr Robert Everitt, St Edmundsburyâs Cabinet Member for Families and Communities said: âWe know that the old tennis courts drastically need replacing. Their relocation to the site of the former Eastgate Nurseries is the ideal location within the Abbey Gardens and will enhance the setting of the Scheduled Monument.

âI am pleased that the Heritage Assessment, commissioned by the Partnership, is progressing well and will then help shape a Conservation Plan for the whole area. Clearly, it would be wrong for us to pre-empt the results of these studies before making decisions about the rest of the area.

âThese studies are about how we better understand and protect the Abbey of St Edmund for future generations to enjoy, and how we understand and explain its significance to local residents and our many visitors.â

Evidence gained from the results of both studies is likely be used to apply for funding for future projects.

Dr Will Fletcher, Inspector of Ancient Monuments at Historic England in the East of England, said:Â  âMoving the tennis courts from their current location has been a long-term ambition and we are delighted to support this new scheme. We feel this proposal will provide a great new tennis facility for the town and will further enhance the setting of the abbey and the park.ââ

Reverend Canon Matthew Vernon, chairman of the Abbey of St Edmund Heritage Partnership said: âWe want to further public understanding of the life and times of St Edmund and the Medieval Abbey. We want people to understand its spiritual, historical and archaeological significance. And we want people to join in and celebrate 1,000 years of the Abbey with us in two yearsâ time.

âPart of The Abbey area has, in modern times, been used for recreation and leisure, and this first project of the Abbey of St Edmund Heritage Partnership will ensure that continues with the provision of new tennis courts.â

Mike Watling, Chairman of Suffolk Tennis, said: âWe are pleased to hear that Historic England have given their consent for the relocation of the tennis courts from their present position to the Eastgate Nurseries area. We fully support the proposed relocation as this will provide the public with an ideal new tennis facility in the town in a far more suitable location, which will hopefully see more participation and enjoyment of the sport in Bury St Edmunds and the surrounding villages.â

In the meantime, the Abbey of St Edmund Heritage Partnership has held the first in what it plans will be a series of public events. A one day community workshop, âPiecing Together the Heritage Jigsawâ, discussed heritage projects at The Guildhall, Moyseâs Hall, West Stow and The Priory Hotel.

Richard Summers from the Heritage Partnership said: âThe day was aimed at anyone who has a general interest in the heritage of our town. The event at the Unitarian Meeting House was packed out, everyone enjoyed it and the feedback has been brilliant.â

The Abbey of St Edmund Heritage Partnership is led by St Edmundsbury Cathedral in collaboration with St Edmundsbury Borough Council and 14 other local and regional public, private and voluntary organisations.