Police investigating an attempted sexual assault in Elveden last week are issuing an E-fit likeness of a man they want to speak to in connection with the incident. 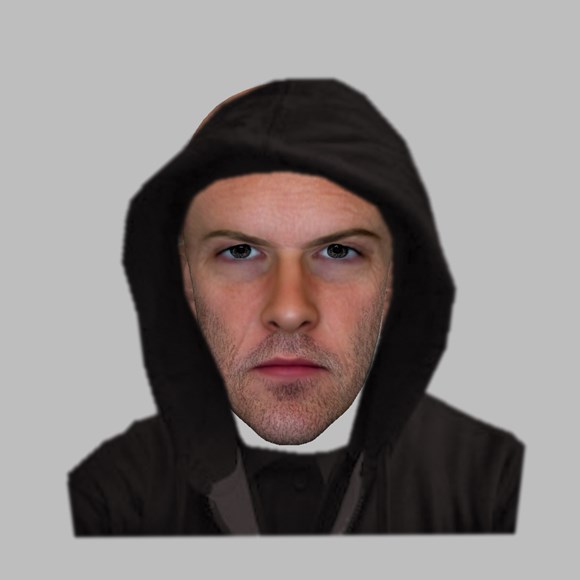 The incident occurred at some point between 11am and noon on Tuesday 9 November, along London Road, known locally as the old London Road/ old A11, junction from the A11 southbound towards Elveden Road.

The victim – a young woman – was out jogging along a footpath, where she was approached by male and assaulted. The woman was hit to the head and the male attempted to pull down her leggings. He then left the area in an unknown direction.

The suspect is described as male, white, approximately 5ft 9ins tall, had brown stubble on his face and he was heard speaking with an English accent. He was also wearing a black puffer jacket with the hood up and was seen with a bike.

The woman, who was found unconscious and lying on the pavement by a member of the public, was taken via ambulance to hospital, where she was treated and later discharged. The victim continues to be supported by specialist trained officers.

Yesterday, Tuesday 16 November, police arrested a second man, also aged in his 30s, on suspicion of sexual assault. He was taken to Bury St Edmunds Police Investigation Centre for questioning and has since been released on bail. He is due to return to police on Tuesday 7 December.

Another man, aged in his 30s, from Thetford, was arrested on Friday 12 November. He was later released on bail and is due to return to police on Saturday 11 December.

Officers also conducted checks in the areas of London Road, the A11 and Elveden Road between 10am and 2pm yesterday, where they encountered and spoke with a small number of people who were out and about.

Officers from Suffolk and Norfolk Constabularies are working together to trace the offender and provide reassurance to the community.

Police would still like to hear from any witnesses who were in the London Road area. They particularly want to speak to anyone who was between the slip road junction with the A11 southbound and the Elveden Road junction, either walking or cycling between 10am and 1pm on Tuesday 10 November, or any motorists that passed through and have a dashcam fitted in their vehicle.

Temporary Detective Chief Inspector Tamlyn Burgess said: “We are continuing our enquiries and are keen to speak to anyone who recognises the male depicted in the image or saw what happened, or who may have witnessed any suspicious activity in the area around that time. This was a frightening experience for the victim, and we continue to support her.

“We have worked closely with the victim over the past few days to pull together further description in order to produce this e-fit that we hope, just over one-week on from the incident, may help the public recognise this male.”

Anyone with information is asked to contact the Major Investigation Team either by using the online portal: https://mipp.police.uk/operation/363721O01-PO1 or by calling 101 and quoting reference: 37/63186/21