An extremely rare piece of jewellery with possible links to the martyred King of East Anglia from whom Bury St Edmunds takes its name, is to go on display in the townâs museum.

The Edmund Jewel will form part of a gradual reinterpretation of the Saintâs story at Moyseâs Hall Museum and may have even been used by the great king himself. The ornate gold jewel, discovered by someone metal detecting in a field in Drinkstone in 2014. It is believed to be an aestal, a 9th century pointer used by people in high status for reading at a time when the majority of people were illiterate.

Aestals themselves are believed to be extremely rare â there are thought to be less than 10 in Europe. The most famous The Alfred Jewel which is inscribed with âAlfred had me madeâ, belonged to King Alfred and is at the Ashmolean Museum in Oxford.Â  The acquisition of the Edmund Jewel will offer greater chance of study and investigation into their purpose and production while also highlighting the skilled craftsmanship of the 9th Century to museum visitors. 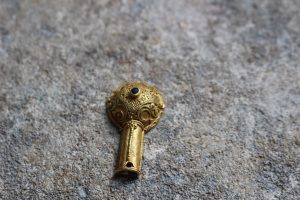 Alex McWhirter, Heritage Officer at Moyseâs Hall Museum said: âWe know that the Edmund Jewel dates back to the ninth century, that Edmund was martyred in 869AD and whether this was made before or after his death, that afterwards Bury St Edmunds became one of the largest Benedictine abbeys in the world, and a main site for pilgrimage in England. The site where the Edmund Jewel was found would have been part of the landholdings of the Abbey; land that some academics have suggested originally had connections to the King himself, while the rarity of the Jewel, coupled with its purpose means it is likely that, if it did not belong to Edmund himself, it would have been made and used by someone in high status in the Church.â 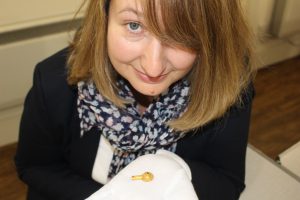 Now, nearly 1150 years on, the Saintâs connection to the town remains strong with calls for his reinstatement as Patron Saint of England. The announcement of The Edmund Jewel comes at a time when the town is preparing to celebrate St Edmundâs Day on 20 November with A St. Edmundâs weekend of activities being organised by St Edmundsbury Heritage Service in partnership with other Heritage sites throughout the Town and We Love Bury St Edmunds!

Cllr Joanna Rayner, Cabinet Member for Leisure and Culture at St Edmundsbury Borough Council, said: âWe know that, like us, our local residents are fiercely proud of our heritage in Bury St Edmunds and it is another reason for us to all Love Where You Live. The Edmund Jewel is another part in this rich tapestry in our collective history that will help provide an even greater focus on the Saintâs story, here at Moyseâs Hall Museum.âÂ

The Edmund Jewel will go on display this weekend to coincide with the final weekend of the âLost Propertyâ exhibition. It will then move into the permanent displays. 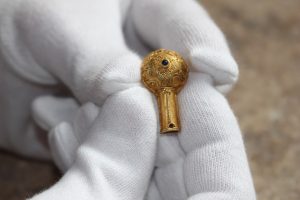 The Edmund Jewel has been secured for Moyseâs Hall following Â£27,500 of funding from the ACE/V&A Purchase Grant Fund, the Headley Trust, James and Frieda Lund Trust, The Alfred Williams Charitable Trust, The Bury Society, Bury Heritage Guides, Friends of Moyseâs Hall and a private donor.