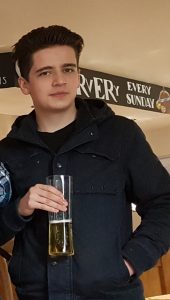 A missing 18-year-old man from Bury St Edmunds has been found.

Harry Mills was last seen on Saturday afternoon, after leaving the town with a friend and travelling to Cambridge.

He was found safe in Kent yesterday evening, Tuesday 10 October. Police would like to thank members of the public and media for their assistance with this appeal.

Police are appealing for help in tracing a missing 18 year old male from Bury St Edmunds.

Harry MILLS was last seen at Hardwick Lane in Bury St Edmunds about 4pm on Saturday 7th October 2017. He was taken by a friend to Cambridge and has not been seen since.Â  He is now believed to be in the London area.

Harry is described as white, 5ft 3in (1.60m) slim build with dark brown short hair. He was wearing a bright blue coat, green jumper, grey jogging bottoms and trainers. He is considered vulnerable and we are concerned for his safety.

Officers are asking anyone who has seen Harry or who has any information on his whereabouts to contact Suffolk Police on 101.